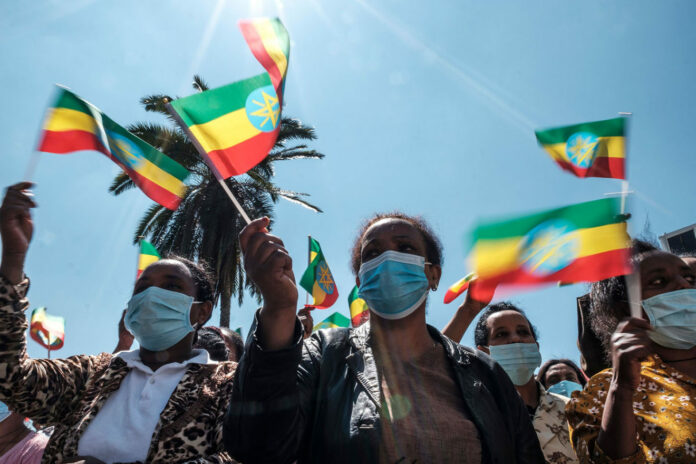 Located in the Horn of Africa, where the heat mixes with humidity to create the climate that favors the eruption of clashes, Ethiopia stands proud carrying centuries of history and culture on its back. Landlocked and separated from the rest of the Muslim-dominated African countries, it now finds itself battling internal demons apart from external foes. What started as a border skirmish between Ethiopia and Eritrea in 1998 has now escalated into a fully developed civil war that threatens the status quo. But who is Abiy Ahmed and who are Tigray’s so-called liberation fighters?

In the turbulent period right after the blossoming of the Cold War one of the ten regions in Ethiopia, Tigray, proudly initiated a war against the Marxist authoritarian era of Mengistu Haile Mariam. After the toppling of the regime in 1991, the Tigrayans and the Tigray People’s Liberation Front (TPLF) ruled Ethiopia unbothered for almost three decades. But the twist in this seemingly peaceful story arose when the current prime minister, Abiy Ahmed, came to power in 2018 and sidelined Tigray’s leaders. When the general elections were postponed in September due to the Coronavirus pandemic, the Tigray leaders in Mekelle, the capital of the Tigray region, defied the central government and decided to hold parliamentary elections on their own.

And just when the world was focused on the Presidential elections in the United States, fighting once again erupted in Ethiopia, when the Novel Peace Prize winner and Africa’s youngest leader Abiy Ahmed ordered the start of the military offensive against Tigray on November 4th. Accusing the regional ruling party of attacking a government defense post and trying to steal artillery and equipment, Ahmed used this as a vindication of his actions which brought a long-simmering feud out into the open.

The conflict between the regional government and the powerful TPLF controlling Tigray comes as Ethiopia faces mounting economic and social challenges, a volatile liberal transition and external pressures from its prying neighbors. The long period of tensions with neighboring Eritrea came to a seemingly peaceful end, when Ahmed led diplomatic talks that brought some peace to their bilateral relations. Yet despite the current peace, tensions are running high and the Eritrean desire for intervention in internal Ethiopian politics remains.

The Great Game for the resolution of the conflict has heightened ethnic divisions so badly that it prompted government warnings of potential ethnic cleansing and even genocide. At a time when the continent is as volatile as ever, with the growing Chinese and Turkish intervention and the initiation of a modern scramble for Africa, such a case would be far from desirable. The potential fracturing of Ethiopia and the upending of the entire Horn of Africa are brought to the table, and with them the desire for democratization of a steadily progressing country.

Previously a strong US ally, the status of Ethiopia is now under scrutiny. Led by a determined and goal-setting prime minister, keen on bringing a liberal era in the country, Ethiopia was seen as a strategic leader in the volatile Horn of Africa. But the brewing civil war has spilled over to Eritrea, which is ever so intent on intervening and influencing internal politics, and has reached Sudan, with refugees seeking protection from the instability. According to the UNHCR report of January 21st, the number of internally displaced persons has been growing steadily, with initial estimates reaching figures at 413’849, and 59’226 seeking safety in neighboring Sudan. With the internal political unpredictability, the redefinition of the role of Ethiopia in the region is very well under way.

Geopolitics aside, the current civil war raises ethical questions on the nature of political leadership as well. Ethiopia is one of the most progressive countries in the region, led by a female President, Sahle-Work Zewde, and embracing the next phase of economic and social development supported by reforms and empowered by the rejuvenation of the private sector. Abiy Ahmed came to strengthen these progressive tendencies, trying to shake up the country after decades of conservative rule under the Tigray People’s Liberation Front. Political prisoners were freed from secret prisons, exiled dissidents were welcomed, and freedom of elections and the press were once again considered the norm. With these wide-ranging reforms, the renunciation of the old regime became permanent and pervasive, and with it a new political regime was slowly emerging. Yet the sidelining and prosecuting of the Tigrayan old guard prompted resentment and anger, followed by their retreat to Mekelle, the regional capital of Tigray. Ahmed continued to call for more centralization which was ultimately aimed at the solidification of domestic power. And the person seen as the modernizer, the reformer, the savior of the country, was now initiating actions resembling a repressive, asphyxiating regime, which relied on the imprisonment of opponents and the disruption of phone and internet connections.

And at the heart of the issue lies the following question: how can an acclaimed and internationally recognized political figure initiate internally repressive actions? Can politics be such a double-edged sword, promising x one day and then deciding that y is the better alternative, no matter the costs? Both sides have been accused of war crimes and the finger has been pointed to both the rebellious Tigray region and the repressive Ahmed regime. What started as a regional conflict has now engulfed the whole nation, with Addis Ababa suffering detentions, imprisonments and job dismissals.

As the tension reaches its peak, Ethiopia’s electoral board announced the cancellation of the license for TPLF to participate in the upcoming June elections. At the same time, famine further raises the stakes, and external threats of domestic intervention make the government turn in its own bed. The regional divisions favored patriotic sentiment, but the ongoing conflict has brought to the surface another kind of sectarianism. The sky was painted green, yellow and red when thousands of Ethiopians waved their flags in a sign of support towards their ‘Tigrayan brothers and sisters’, as flag-wavers put it.

The Nobel Prize serves as a shield, diverting attention from internal political mishandlings and towards the greater liberal sentiment that he was trying to instill. Ethiopia has been trapped in an ongoing historical struggle with its Eritrean neighbors, and now is also engaged in a high-profile standoff with Egypt over a hydroelectric dam, the Grand Ethiopian Renaissance Dam that is being built on the Nile. Landlocked, internally incoherent and internationally criticized, Ethiopia is having a hard time to prevent further regional divisions, controlling the fragmentation of the status quo and avoiding becoming the pariah state in the African continent.

A nation known for its reference in Homer’s times, for its freshly ground bean coffee, its rock-hewn monolithic Lalibela churches and its lively, traditional cooking, is now finding itself struggling to harmonize liberal, progressive forces with a slowly adapting society. Abiy Ahmed sought to secure hold of power, by allowing progressive goals to manifest and by marginalizing the status quo’s previous establishers. Most of the times, when ambitions and pragmatism mix, tensions are bound to emerge.

The ongoing conflict is crafting a large hole in the middle of the Horn of Africa: a continent that relies on cooperation, where one change permeates all borders and where leaders think first of geography and then of ideology, the destabilization of the regional equilibrium is bound to dictate a new future for Africa and certainly a much different, less liberal path for Ethiopia.