Joe Biden and race; the journey towards the 2020 election

On Monday, August 17, ELLE magazine released a zoom interview between two seemingly contrasting personalities; presidential candidate Joe Biden and American rapper Cardi B. The video has reached over 380 thousand views, but the question remains; why did this odd discussion ever take place? Even though issues such as police brutality, free medicare and free tuition were brought up in the interview, many could argue that the end goal was not policymaking but rather the address of a different demographic.

The following day, Biden spoke with Lin-Manuel Miranda, the Puerto Rican creator and protagonist of the hit Broadway show Hamilton. The conversation was held virtually and was organised by the Latino Victory Project and NowThis, an American media company. It aimed to approach the Latino community as both interlocutors agreed that their vote would be crucial in the upcoming election. Neither of the celebrities overtly endorsed Biden; nevertheless, the images that paired the presidential candidate with Cardi B and Miranda are hoped to have brought along a favourable indication.

It is no news that the democratic candidate is old – 77 to be exact. He is white, wealthy, and a cis male[1]. To millennials, Biden probably represents the “old regime” or “elite” of politicians, who prioritize the economy over climate change and social justice. From this perspective, it seems that his appeal to younger and progressive voters will need to be strengthened out before November 3rd.

However, this election is far more than the old-time rally between Democrats and Republicans and a lot more is at stake. The recent Black Lives Matter (BLM) protests, which have sprung out over 4,300 cities worldwide, have underlined the relevance of race in today’s politics. The ever-growing movement has been successful in showcasing examples of systemic racism, primarily but not exclusively against the African American community whether it concerns the judicial or the economy. Thus, where does Joe Biden stand on the topic? And what might his win mean for racial minorities at large? 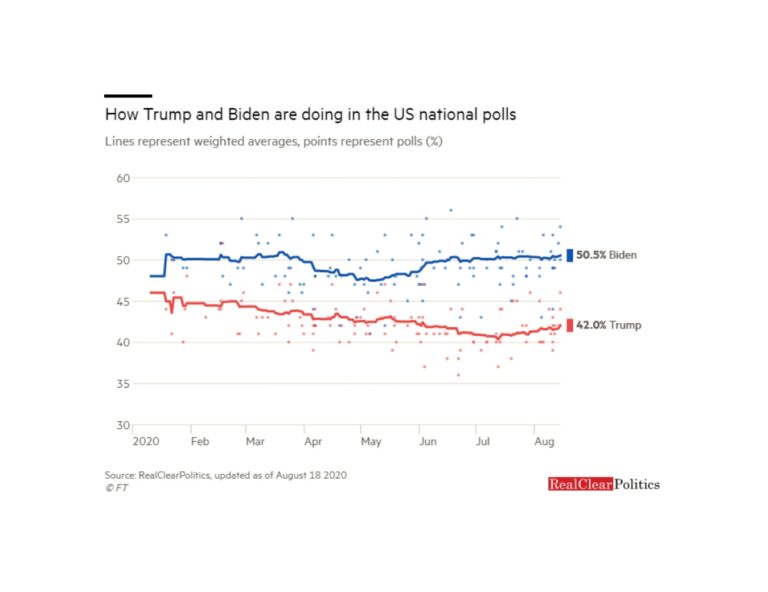 Before diving into his current campaign promises, it is worth examining some of his past policies and actions; after all, he has been a politician for over 40 years. One of his most notable and controversial decisions was opposing “busing” in the 1970s, as a member of the U.S. Senate from Delaware. The term was used to describe the use of buses as a means of transporting pupils to schools with regard to overcoming segregation. The practice was made mandatory in 1971 thanks to a U.S. Supreme Court decision (Swann v. Charlotte-Mecklenburg Board of Education case). This issue was the subject of one of the most memorable and striking attacks on Biden during the democratic primary debates, made by his former contender – and current VP nominee – Kamala Harris. He publicly apologized later, yet the quote “And that little girl was me” is still on everyone’s mind.

Another questionable decision was approving the 1994 Violent Crime Control and Law Enforcement Act, introduced by former President Bill Clinton. The crime bill is claimed to have led to the mass incarceration of black men in the 1990s. In addition, some of his latest blunders include comparing cultural and historical characteristics between the Latino and Black communities and openly saying “you ain’t black”, if you vote for Trump. Once again, an apology landed ex-post, but was it not too late?

That being said, Biden has historically secured relatively high approval rates amongst African Americans, especially with people over 50 years old. His name is instinctively accompanied by that of former President Barack Obama, the first African American person to hold the oval office in the United States 200-year history. This positive image is likely to be strengthened out thanks to Kamala Harris, his choice nominee for Vice President. She is both African American and Asian American; she is a woman with a lot of years of experience as well as widely known and likeable. Her identity and background amount to a series of “firsts” that excite and inspire the U.S. public. 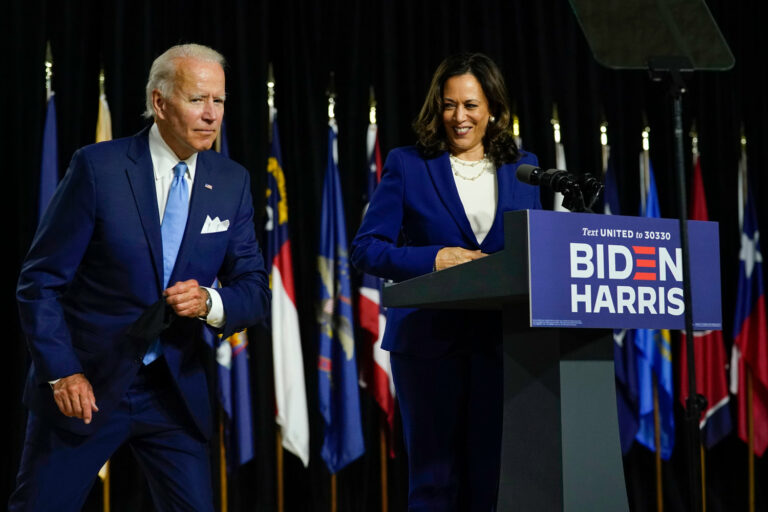 If elected, Biden and Harris will have to work hard in order to restore the “soul of America”, Biden’s main campaign slogan. Against this background, he has announced a comprehensive list of initiatives and policies that aspire to repair racial inequalities. Concerning the judicial system, Biden has promised three actions; these include a) appointing a new attorney-general who is sympathetic to the BLM movement and auspicious for related reforms, b) nominating the first black woman to serve in the U.S. Supreme Court and c) eliminating “mandatory minimums for nonviolent crimes and the cash bail system”.

On education, he has vowed to offer free tuition to Latino, Black and Native American students whose families’ income is less than $125,000 a year in attending a public college or university, an historically black college or university (HBCUs) as well as a similar private institution. Moreover, he is considering to forgive “all federal student-loan debt related to undergraduate tuition at HBCUs and minority-serving institutions for debt holders earning $125,000 or less”.

Regarding housing, his platform has proposed a new scheme so that more families of colour are able to own their residence. Another level of ambitious planning refers to the economy. The Federal Reserve will be called upon to investigate, document, and gather evidence of any pattern of racial discrepancy. Biden has also reaffirmed that small businesses, particularly those owned by people belonging to a racial minority, will be prioritised and boosted.

The presidential election may seem lost on the horizon for many voters. Nevertheless, the political tension is far from cooling down. The increasing discussion on systemic racism in the U.S. coupled with the coronavirus pandemic and the rise of unemployment, has shed light on the health and wealth disparities between the white and non-white population; thus, greater pressure is applied on politicians and public figures to act decisively and fast. 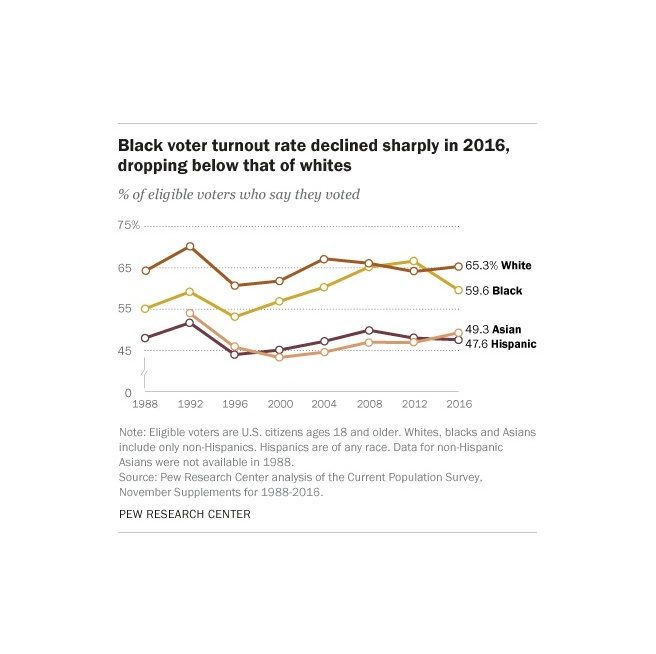 Higher demands are placed upon the voters as well. Although Hillary Clinton won the popular vote in 2016, turnout for black citizens (59.6%) was reduced compared to 2012 (65.2%). Asians scored 49.3% and Hispanics 47.6% in terms of voter turnout. All three percentages followed that of the whites (65.3%). Furthermore, black women account for nearly 15 million registered voters and have traditionally been a key group in previous elections, for example, in the case of Obama, Clinton, and Jimmy Carter.

To them and many others, this year’s virtual Democratic National Convention might have been additionally appealing thanks to its speakers that included, amongst many others, former First Lady Michelle Obama, George Floyd’s brother and father, and U.S. Representative Alexandria Ocasio-Cortéz. But even if people did not take notice, Kamala Harris’ position remains promising.

The upcoming election is not simply about combating the coronavirus pandemic or limiting the consequences of an economic recession; it is also about restoring a divided and angered nation. Whereas Trump declares that he has “done more for Black Americans than anybody with the possible exception of Abraham Lincoln”, Biden’s commitment to equality and diversity is prevailing. In order to revive the “soul of America”, a lot more is needed than four years of Biden’s presidency; yet it is a good starting point.

[1] Cisgender or cissexual is a term for people whose gender identity matches their sex assigned at birth.

How does tourism affect our environment?

“Good Omens”: A look on the most “feelgood” end-of-the-world scenario

Welcome to Inditex, where garment workers fight for the bare minimum…

How does tourism affect our environment?