Søren Kierkegaard’s Either/Or: How should we live?

What is life? How are we supposed to live? What do we mean when we say, “good life” and “bad life”? What are their characteristics? Questions such as these have preoccupied a variety of researchers, intellectuals, even every-day people over time. Søren Aabye Kierkegaard, born in 1813 and wondering the same questions, authored his first work entitled Either/Or: A Fragment of Life. Published in two volumes in 1843, Either/Or depicts two points of view about life itself: the aesthetic mode of life and the ethical mode of life.

As mentioned above, Either/Or presents two life views, each of these are written by a different pseudonymous author. Each author’s opinions and point of view of life are according to their life and society status. The author of the “Either”, ‘A’ (as in the “aesthete”), resembles a poet during the Romanticism movement. Writing in an artistic, literal, intellectual, and musical literary style, the aesthete’s topics consist of love, music, seduction, and beauty. He constantly talks about how grateful we should be to life for its offerings, hence we ought to seize that opportunity and live life to its fullest by doing things that please us. However, in “Crop Rotation: An Attempt at a Theory of Social Prudence” and ‘Diary of a Seducer”, subchapters in Either/Or, the aesthete confesses that, as easy as it is to be interested in a book, a person, or a sports game, it is just as easy to lose interest in these unexpectedly. The more we are inclined to living for the sake of our personal gain and ecstasy -especially the carnal pleasure, the quicker everything will become a routine, which we will get bored of it and will not be as interested as we were in the beginning. At that point he adds the factor of relativity: for instance, one day a person might be interested in painting, and the next day his interest might ‘move on’ to a new activity, such as cooking. At the end of the day, no matter what your interest is, everything becomes a daily routine; even the appreciation of life, music, and marriage. Finally, Kierkegaard points out that the aesthete will eventually ‘encounter’ despair in his life, the result of the aesthetic approach he has had in life so far. By the aesthete eventually finding himself in despair, a natural ‘leap’ will take place to the rational and ethical way of life. 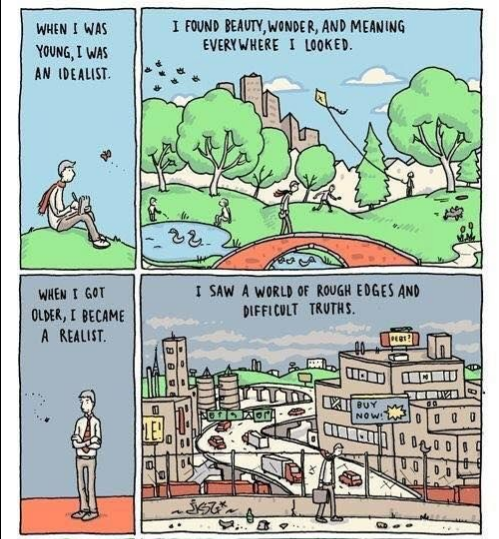 On that pessimistic and realistic tone, the second pseudonymous author of “Or”, Wilhelm, a middle-aged judicial counsel, mainly attempts to prove to the first author, ‘A’, how valuable the ethical stage of life is and, ergo, try to convince him that he too, as an ethical person, can enjoy the joy of life. However, the only difference between the two men is that Wilhelm is tempered with ethical values and responsibilities before pursuing pleasure. Apart from criticizing the aesthete for his naïve way of living, Kierkegaard was especially caustic about the 19th century understanding of love and the new ideology of passionate marriage, which aimed to unite desire with prudence, and suggested that one could enjoy all the thrills of a love affair, and, at the same time, all the stability for long-term relationship. In “The Aesthetic Validity of Marriage” in the “Or”, Kierkegaard the notion that one could ever fuse romantic laugh with marriage, that one could have passion and sex, and, at the same time, children, stability, and routine. In fact, he respected both, he just could not fathom you could have them both at the same time -in a cozy marriage sanctified by the state and the neighborhoods. Lastly, Kierkegaard admits to himself that, either you decide to do something or not, the result will be the same: you will regret both options.

In conclusion, Either/Or is an exceptional masterpiece of Kierkegaard’s, which only resulted in more trivial subjects to occur in his next works, such as death and religion (The Concept of Anxiety, The Sickness Unto Death, and Fear and Trembling). By presenting the aesthetic and the ethical phases of existence, Kierkegaard was the pioneer in the philosophical movement called Existentialism. In my opinion, though, the transition from the aesthetic way of life to the ethical one is mandatory. We should not be happy-go-lucky while we are alive; it is our responsibility to think rationally and realistically as we grow older. Although living in our own utopia will end up in despair, being strict and serious all the time will not result in living longer. Either way, no matter how we choose to live, we will regret it. As Kierkegaard says, “I see it all perfectly; there are two possible situations – one can either do this or that. My honest opinion and my friendly advice is this: do it or not do it – you will regret both”.

Kojiro Sasaki: The greatest loser in history… or not?

Penny Theodorakopoulou
Born in Corinth in 1999, she studies philosophy at University of Patras, and is currently on the third year of her studies. She enjoys reading modern philosophy, and would like to research on it after she graduates. Her passion is English and movies, as well as reading and writing movie reviews on her free time.