Taiwan’s role in the US-China dispute 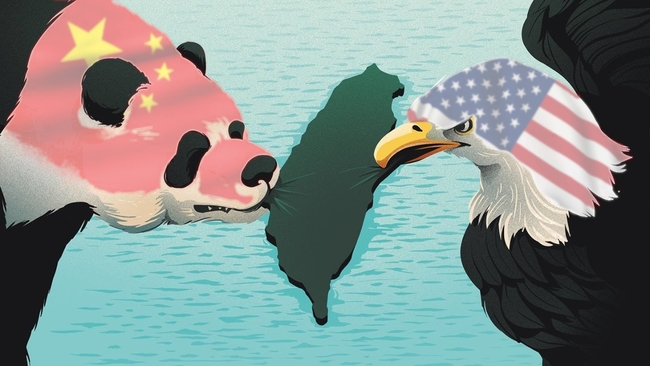 International relations and political science students have learnt about the “Great Powers” during their studies. This term refers to countries that, during a period under examination, have possessed significant economic, political, military and diplomatic strength. For instance, in the Cold War era the two “Great Powers” were the United States of America (USA) and the former Soviet Union. Nowadays, it is not as clear as it was in the aforementioned time period, who the contemporary “Great Powers” are, due to the fact that quite a few countries have risen and, therefore, many regional powers have emerged. However, it is a common belief that the two most significant world players are the USA and China and thus their rivalry can be justified.

Since the end of the Second World War, relations between the two nations have been tense for most of the time and have crucially escalated during Donald Trump’s presidency. Highlight of this rivalry is the trade war that commenced in the summer of 2018 due to the tariffs and trade barriers which were imposed by the US President to Chinese goods imported to North America. Simultaneously, China took retaliatory measures by also imposing tariffs to American imported commodities. This war caused the trade world to be in unease as its two major actors were fighting one another. Lastly, the coronavirus pandemic has worsened relations even more as President Trump accuses China of being responsible for it, by referring to it as the “Chinese virus”. But, how does the island of Taiwan relate to this dispute?

Taiwan is a self-declared sovereign state, which is only officially recognized by fifteen countries whilst others do so unofficially by hosting representative offices rather than embassies or consulates, and by maintaining trade relations. If a country wants to maintain official relations with Taiwan, it has to cut any relations with mainland China. The latter, according to its “One China policy”, expects that Taiwan will one day be reunified with the mainland. Regarding the USA, they do not officially recognize the independence of the island but they sell arms to it and therefore contribute to its defense (Taiwan Relations Act), making them Taipei’s crucial security ally. More than 60 years ago, amidst the tensions between the mainland and China, the USA proposed an unofficial median line, the Taiwan Strait Median Line, which was respected by both until last year. Precisely, the Chinese army violated it and up to today the People’s Liberation Army’s air force has crossed it another five times. Recently, the Chinese army has conducted exercises and drills close to the island that have alarmed the Taiwanese government. Nonetheless, this does not necessarily mean that the Chinese have turned to war to achieve reunification, but it can be considered as a means of pressure to the island’s people and a means to cultivate the feeling of uncertainty towards its officials. Probably the reason why China does not want to start a war with Taiwan is that, it would equal starting a war with the USA, which is something they cannot afford. Therefore, they choose to put pressure indirectly to Taipei.

On the other side, the USA by approving the possible sale of $1.8 billion worth of arms to Taiwan has dissatisfied the Chinese who accuse the Americans of violating their diplomatic relations agreement. The USA knew that such move would trigger China’s respective officials, especially during an already-tense period for their relations. Thus, Chinese authorities are threatening that they will retaliate by imposing sanctions to the defense unit of Boeing Co., Lockheed Martin Corp. and Raytheon Technologies Corp. However, the strategy which the USA has been following has been characterized as “strategic ambiguity” because on the one hand it does not recognize Taiwan as an independent country, but at the same time it supplies it with weapons. The aforementioned strategy facilitated China’s deterioration from aggression and the balance of its emergence as a regional power and simultaneously kept Taiwan from political moves, such as its official declaration of independence which would disrupt the balance of power. It is worth noting, though, that the Trump Administration is not clear about its intentions for Taiwan. More specifically, whilst one would say that the rivalry with China would benefit Taiwan, the US President’s isolationist policy undermines the credibility of providing support to the island. The American President is known for his ambition to strengthen the USA by making them independent of any international institution or agreement. Therefore, a feeling of uncertainty has been cultivated in the Taiwanese people about whether their only friend and ally will defend them as they have done all these years.

The dispute between the two “Great Powers” of this era is still ongoing. Probably, it will not end with an armed conflict between the two, as the means and types of contemporary wars have changed. More specifically, it began with a trade war between them, but it can be seen that it has shifted to other levels as well and Taiwan will play a significant part in this. However, it is uncertain how things will develop due to President Trump’s foreign policy’s decisions. Despite the fact that there is a possibility he will not be in office next year, the Sino-American relations will still be tense and the next President’s policymaking will be crucial in resolving this rivalry, no matter who that will be. It could be said that the global order is noticeably shifting but it is unclear to which side the balance of power is tilting. This question can only be answered afterwards, but to see how things will turn out between the two Great Powers of this era, remains intriguing.

Financial Times. Will China and the US go to war? Available here.

By Katya Mavrelli,  By now, the climate emergency has become evident to all. Though some are more reluctant to accept it than others, the impending...
Διαβάστε περισσότερα
English Edition

The history of emojis

By Veronika Sinou, One of our favorite text habits is -without a doubt- the use of emojis. Their plentiful variety starts from the pictorial representation...
Διαβάστε περισσότερα
English Edition

By Anastasios-Fotios Tsochatzidis, As already mentioned in a previous article, Alternative Dispute Resolution, also known as ADR is a way to settle disputes without litigation....
Διαβάστε περισσότερα